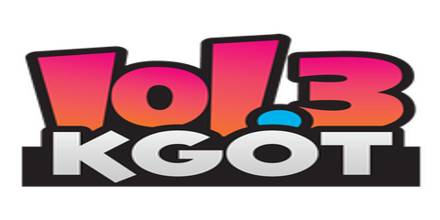 101.3 KGOT is an internet-based commercial Top 40 (CHR) radio station in Anchorage, Alaska. It plays diverse categories of hit songs featuring Classic, Rock, R and B, Hip Hop, Jazz etc. The station is owned by iHeartMedia, Inc., and broadcasts (along with its sister stations) from studios in the Dimond Center. The station, first under its original call letters of KYAK and later as KGOT, was principally recognized in the Anchorage radio market for its decades-long association with disc jockey Larry Wayne (who also had a stint during this time at KENI when it was a Top 40 station). Wayne became a born-again Christian during his time at the station and later hosted a gospel music show on Sundays. After leaving Anchorage, he became better known due to his organization with Air 1 and K-Love.

101.3 KGOT (actually iHeartMedia) offers advertisers nationwide opportunities through its supreme variety of media assets including on-air, online, and live events. It creates comprehensive, innovative campaigns for some of the country’s largest companies.

Liveonlineradio.net has 101.3 KGOT in its listings. Just click and enjoy.