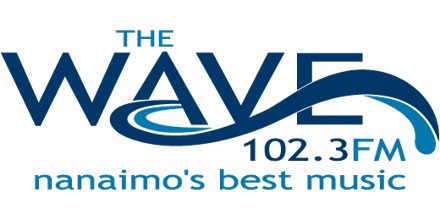 The Wave 102.3 FM, also known as CKWV-FM is an online internet based Radio station broadcast from Nanaimo, British Columbia, Canada. Here provides Nanaimo’s Best Music and serves the communities of Nanaimo, Ladysmith, Lantzville, Nanoose Bay, and Gabriola Island. Basic genres are Top 40/Pop, Hits, and Adult Contemporary Music. It broadcasts on 102.3 FM and is owned by Island Radio, a division of the Jim Pattison Group.

102.3 The Wave bringing you a great mix of music whether you’re at work, in the car or just jamming out at home.

102.3 The Wave dominates the ratings targeting females 25-54. This station committed to local news, information, and entertainment, with engaging personalities and high visibility in the Nanaimo area.

CKWV first signed on-air on May 24, 1949, as CHUB, on its original frequency of 1570 AM with a 250-watt transmitter, with its studio in the Malaspina Hotel on Front Street in downtown Nanaimo; its first program was a broadcast of the annual Empire Day Parade.

To expand its coverage to surrounding areas, CHUB increased its power to 1000 watts in 1951, with Sun employees Chuck Rudd and Sheila Hassel arriving to manage the station; among the later staff at the station were evening DJ Larry Thomas, morning host Lyall Feltham (in 1956), news director Pat O’Neill and sports announcer Jim Robson.

In 2005, Central Island Broadcasting, reflecting its expanded presence on Vancouver Island with the establishment of Courtenay station CKLR-FM and the acquisition of CJAV, changed its corporate name to Island Radio.

Liveonlineradio.net has The Wave 102.3 FM Radio in its listings. Just click and enjoy.