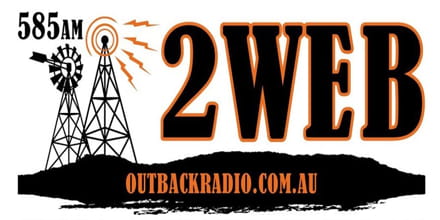 2WEB Outback Radio is a community radio station. The Community Radio Codes of Practice govern what you hear on community radio. It broadcasts from Bourke, which is located in the Far Western region of New South Wales and is known as the “gateway to the “real” outback.” The Codes of Practice address program content issues such as local content, news, current affairs, Australian music content, children’s programming, and the responsibilities associated with community broadcasting. These codes also address issues such as community access and participation in the service’s operation.

2WEB is Bourke’s community radio station, “the gateway to the “real” outback,” broadcasting local news, current events, Australian music, and much more! The broadcast area of this radio station extends over 130,000 square kilometers. In the listening area, there are few “major centers,” but there are many smaller towns and communities. Due to the seasonal nature of much of the industry, the population fluctuates throughout the year; however, the estimated static population of the listening area is around 100,000 people.

Since 1978, 2WEB has been broadcasting to far western New South Wales, southwest Queensland, and northeastern South Australia. The center of its listening area is also the intersection of two of Australia’s newest highways. The ‘Kidman Way’ is the most direct route from Melbourne to Darwin, and it is quickly gaining popularity among both transportation companies and tourists. The Kamilaroi Highway connects Melbourne and Brisbane and has long been the preferred route for Victorian, South Australian, and Western visitors heading to coastal Queensland.

The Mitchell Highway, which runs through the heart of the outback and has been the lifeline of the western region for many years, now connects Sydney with the northern capitals via the aforementioned routes. The Bourke Shire estimates that approximately 1000 vehicles travel these highways each day. With seasonal fluctuations, the annual figure is in the neighborhood of 500,000 vehicles.

There are over 100,000 potential listeners in the western region at any given time, whether static or transient, recreational or industrial. Over the years, 2WEB has refined its programming to become the preferred station in the outback, and for many of its audience and for much of the time, 2WEB is the only station available.

The Western Region of New South Wales is one of Australia’s most diverse industrial areas. Of course, the rural-based industry is by far the most prominent and diverse. Irrigated agriculture has gradually surpassed instantly recognizable staples such as broad acre farming and grazing. Wine and table grapes, olives, citrus and stone fruit, cotton and wheat, and more experimental crops like jojoba are all available. Mining and mineral exploration have played an important role in the local economies, alongside viticulture and irrigated agriculture.

Tourism is by far the fastest-growing new industry in the region. The outback has become a high-priority destination for both international and domestic markets as a result of the country’s overall success. The outback has come to symbolize Australia as much as the Harbour Bridge or the Opera House, which has become far more accessible in recent years due to increased infrastructure and more easily recognized due to the communications explosion.

2WEB is prominently featured as an important part of the outback’s psyche. The station has been a lifeline for the outback in times of need as well as a companion in happier times. On numerous occasions, it has served as the only link between isolated communities and the rest of the world. It is also the means by which western travelers can navigate the sometimes treacherous outback region.

Liveonlineradio.net has  2WEB in its listings. Just click and enjoy.