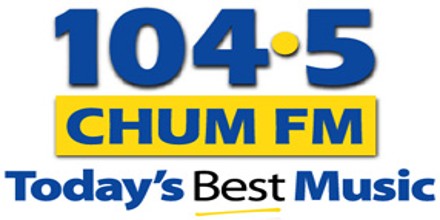 104.5 CHUM FM is consistently one of Toronto’s most admired hot adult contemporary stations operated by Bell Media. It decorates its playlist for a socially and culturally diverse audience. Their productions and information-based programs contain current affairs, culinary, cultural, entertainment and sports fields. This station is working as a bridge between listeners and music.

CHUM’s studios are located at 250 Richmond Street West in the Entertainment District, while its transmitter is located atop the CN Tower. This radio station is currently the second most listened-to station in its market. CHUM FM started broadcasting on September 1,1963 with an ERP of 18,000 watts and a transmitter and studio at 1331 Yonge Street. It aired a classical music format, the first station in Canada to do so.

In June 1984, the station started evolving towards adult contemporary, with the shift completed by that September, though the station would retain a rock lean through the remainder of the decade.

The station evolved towards its current Hot Adult Contemporary format in 1990. Since the mid-1990s, CHUM FM’s playlist has been noticeably more open to periodic, carefully selected rhythmic crossover songs, including R&B, reggae, hip-hop, and dance music, while keeping some 1980s, 1990s and 2000s songs.

At the 25th Anniversary Canadian Music Industry Awards, held March 8, 2007, CHUM FM was honored as Station of the Year, Program Director of the year for CHUM FM PD Rob Farina, and air talent of the year for Roger, Rick & Marilyn. Former CHUM President Jim Waters was inducted into the Music Industry Hall of Fame that same evening.

Until late 2009, CHUM-FM continued to be the most listened to and most influential radio station in Canada with over 1,166,000 weekly listeners according to the BBM data released on December 3, 2007.

Beginning in the summer of 2016, CHUM FM began to ramp up advertising for new Bell Media partner brand iHeartRadio.

CHUM-FM’s morning show has been hosted by Roger Ashby and Marilyn Denis for 30 years. The show runs from 5:30 AM until 9:00 AM.

On February 5, 2007, CHUM-FM became the flagship station to a syndicated interactive evening show titled, The Sound Lounge. The show handed over control of the content to the user’s hands by an all listener chosen playlist, and the opportunity to interact with listeners coast to coast via email, SMS, and voice.

Liveonlineradio.net has CHUM-FM Radio in its listings. Just click and enjoy.